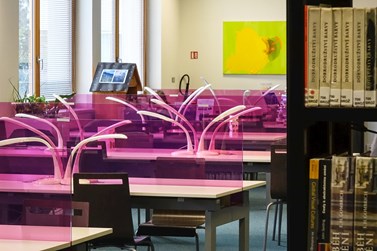 Under these links you will find more information about our Department and about our publishing activities, as well as about the projects that the members of our Department carry out or in which they participate.

Space and its habitation: A view of space in the works of Marie Noël, Suzanne Renaud, Christiane Singer and Sylvie Germain)

The publication summarizes the research results of various types of space in the literary works of four Christian inspired French authors, M. Noël, S. Renaud, C. Singer and S. Germain. Their literary texts cover the whole of the 20th century and show diversity in approaches to space, but also a difference in the literature of 1st and 2nd halves of 20th century. Methodologically, it proceeds from the phenomenological view of G. Bachelard on the intimate space of the home, through the open and sacred space according to M. Eliade’s study, towards the geocritical analysis of the space, based on the almost unused B. Westphal’s theory of geocriticism. The study of space shows that literature can not be separated from the outside world, on the contrary, it contributes to its better understanding.

This dissertation focuses on French crime fiction after 1968 and, in particular, one of its forms – roman noir. It analyses how this genre reflects contemporary French society and its position and role within it. In the second part, based on a selection of novels, the author specifies a number of themes which she finds are characteristic for the crime literature of this period.

As a result of the analyses carried out in both parts of the thesis, the conclusion drawn is that French crime fiction after 1968 mainly represents the opinion base for the generation strongly influenced by the ultra left wing ideology of the May '68 riots. Subsequently, the genre has enabled this generation to disseminate its ideals and has presented the means for social and ideological criticism of French society.

The book focuses on the topic of language content of textbooks of French as a foreign language teaching. After a theoretical background, three investigations are presented. The research aim was to investigate the correspondence between grammar, vocabulary and language functions intended to be acquired and the reference level of language proficiency A1. The quantitative analysis focusing on language content of textbooks indicated some common features with similar qualitative studies carried out in France, Germany and Great Britain. For all analysed textbooks, the language content intended to be acquired revealed lot of overlaps of the reference level of language proficiency A1, which may increase the cognitive complexity of tasks.

Words of French origin constitute in Czech a significant part of the loan-words from other languages. They were loaned mostly through German but also direct from French. The dictionary contains an alphabetical list of French loan-words. Each entry is accompanied by morphological categories, factual commentary and French etymon. Some entries involve the pronunciation and variants. The entries are arranged into groups according to kind of loan: direct loan-words from French, loan-words from French through another language,loan-words from another language through French. In the introduction we study them according to their degree of adaptation to Czech from phonetically, morphological and semantic point of view. We compare their occurrence in French, in Polish and in Croatian.

A set of 23 dictations chosen from the works of French authors of the 19th and 20th centuries are intended for B2 students of French who are studying at the Faculty of Education. The aim of this publication is for students to deepen their knowledge of French spelling rules and put them into practice, to improve their pronunciation and to expand their French vocabulary. The CD version contains transcriptions of the dictations accompanied by a French-Czech dictionary. The texts and vocabulary are read by a native speaker (co-author of the book). The publication contains a key for self correction. The French-Czech dictionary contains 1064 selected words.